Navy Rings can be personalized in a few easy steps using our simple guidelines. The rings are a wonderful way to commemorate a lifetime spent in the Navy. With eight specific areas on the ring for personalization, it’s a great way to record service details. 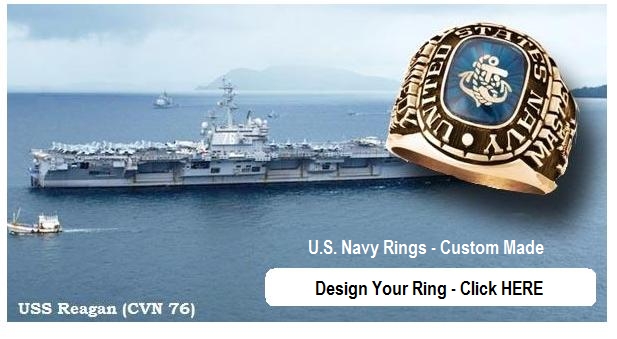 We honor all past and present members of the Navy for their strength of character. Their dedication and the ongoing sacrifices they make on our behalf is wonderful. Whether they work behind a desk, fly naval aircraft, or serve on a cruiser or other naval ship, we can thank them sincerely. Rings are beautiful symbols of the skill, commitment and dedication of Navy personnel.

The United States Navy is the seaborne branch of the US military. Its history is long and proud, but the navy did not come into its current prominence until World War Two. America’s involvement in that war was the result of the surprise attack on Pearl Harbor. The Navy’s role in World War Two was essential to the Allied war effort. America could not have won the war without the Navy and those who served in it.

Because of its superior technology and ability to project force far from American shores, the Navy is a very potent power. Thousands of men and women currently serve in the US Navy. It’s the largest and most sophisticated navy in the world. Men and women are constantly on duty, defending our seas in peacetime and during war. We will never be able to repay them for their dedication. All we can do is show our appreciation.

Rings can also show a person’s service in a particular fleet, flight squadron or specialty command. They can even be used to show service on a specific ship. Rings can indicate that a person served during a particular war or armed conflict. Wars such as Operation Enduring Freedom, the Gulf War, the Vietnam War or the Korean Conflict. They can show rank insignia, combat medals or other military decorations into their designs.

Rings generally follow one of three underlying design types. The first basic design is similar to a traditional school ring or class ring. It can have a semi-precious gem or colored stone set in the center of the top and symbolic designs engraved partway down the sides of the band.

These Navy rings sometimes have a central gem or stone but others do not, instead featuring engraved symbolic images on the metal at the top of the ring. The bands of this ring design are usually not decorated, giving it a strong but elegantly understated appearance.

Our Navy rings, no matter which underlying design they use, are beautifully engraved with intricate detail. All our Navy rings are available in your choice of sterling silver, yellow gold or white gold. And any Navy ring can be made even more special by personalizing it with the initials or name of its owner engraved on the band. But personalized or not, our Navy rings are inspirational