Army Rings Personalized for all divisions and units of the United States Army. We specialize in retailing handcrafted customized rings for the US Army personnel.  The Army consists of hundreds of thousands of men and women. Constantly on duty to protect the free world. Ready to respond immediately to any mission to defend our freedom.  They provide a shield for our country’s national borders and interests throughout the world. In peacetime and during the war, from private to general they are the world’s strongest fighting force. 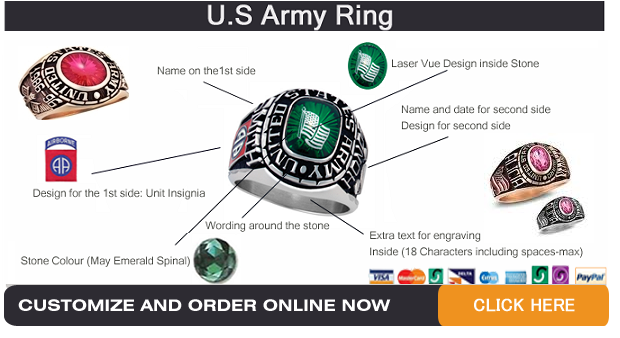 We honour the men and women currently serving in the Army and those in retirement. There is no better way to honour those men and women for their commitment to us and to their country, than one of our stunning Army rings.

Rings are a beautiful enduring symbol of an officer’s or enlisted person’s commitment. A symbol that’s as enduring and strong as the commitment itself. The Army has seven core values: loyalty, duty, respect, selfless service, honour, integrity and personal courage. The strength of character these values represent is perfectly reflected by the rings. US Army rings can indicate a person’s service in the Army in general. They can be customized to reflect membership in a specific regiment or battalion.

POW rings incorporate the design of a specific combat medal, badge or other military decoration. These are unique, beautiful and deeply symbolic. Rings generally use one of three basic designs. All designs are available in your choice of sterling silver, yellow gold or white gold. The first type is somewhat ornate and similar to the class or college rings. This style of ring conveys strength and usually has a coloured stone or semi-precious gem set into its centre. Symbolic designs are typically engraved or etched on each side of the stone. These can be stretched well down the sides of the band.

The second style of ring is a more elegant choice. Featuring flowing lines, it is less ornate, less massive and much more streamlined. It conveys the wearer’s dedication and service in a more understated way. This ring is sometimes set with a central stone or semi-precious gem. On occasion, its central surface has no stone but a symbolic image or meaningful text is engraved into the metal at the top.

In keeping with its simple elegance, the sides of the band are usually not engraved or otherwise decorated. The third basic design for an Army ring is similar to a signet ring or seal ring. This type has no central stone or gem and uses military coats of arms or Army insignia as the design at the top of the ring.

Rings can be personalized in a number of ways, including engraving the initials or name of the owner into the band. Personalized Army rings are uniquely appropriate to honour the importance of the owner’s past or present service. Military Police and Military Intelligence Rings are also available at Military Online Shopping.